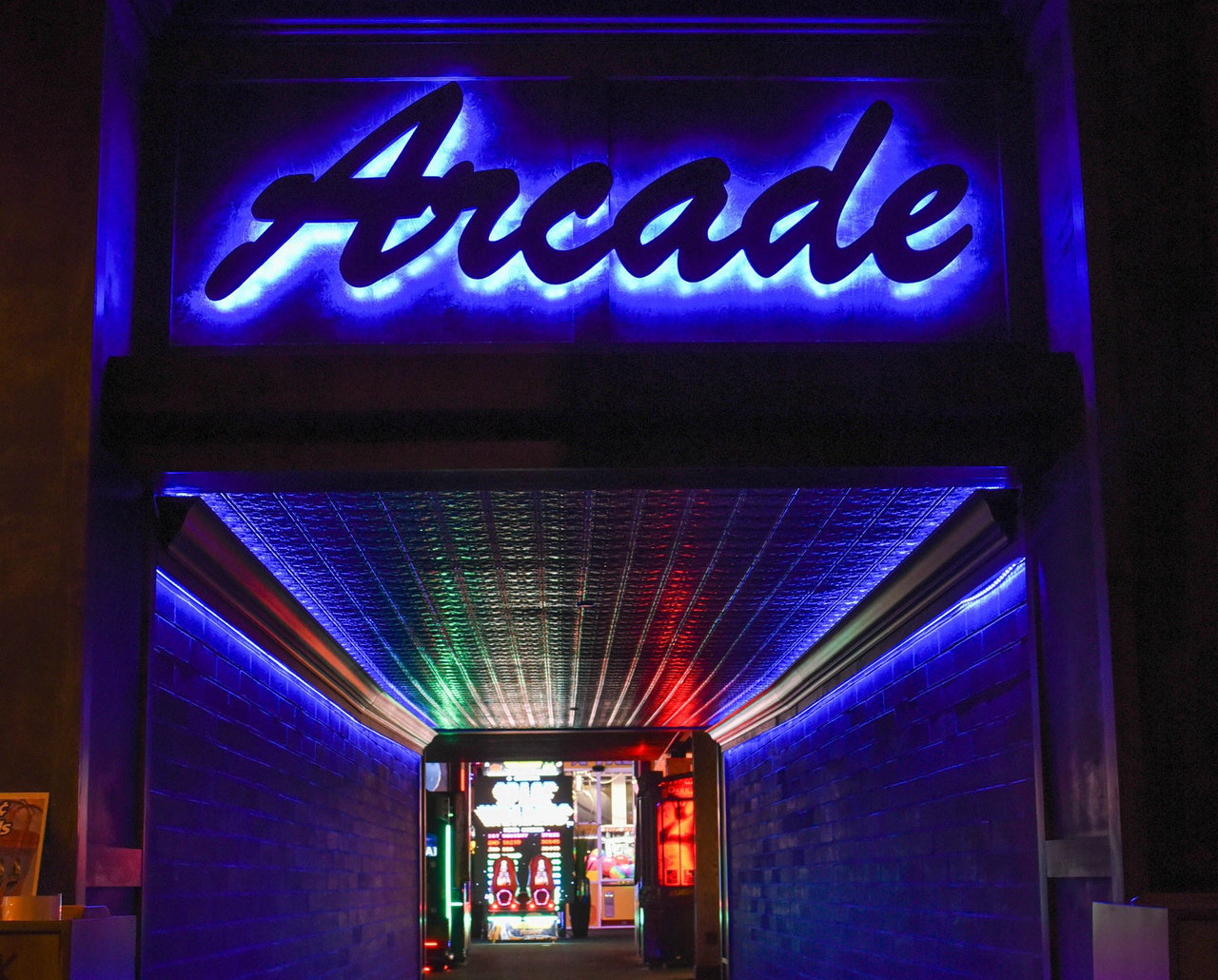 I know arcade games have been around since the 1970s but this article is focused on the 90s which is my era of specialty. I grew up playing games in the 90s and I still hold a fair bit of nostalgia for these times. My early social interactions were at arcades, my first date was at an arcade, my appreciation for skill and competition were learned spending weekends losing over and over against kids that were just more skilled than me, and my interest in game hardware and electronics in general was instigated while watching a technician convert a cabinet to Super Street Fighter 2. I’ve done my best to not sound like a crotchety old man describing his long forgotten, over-estimated youth, but it’s difficult to deny myself these inclinations.

During this era, you could find an arcade anywhere: your local pizza place, movie theater, theme park, miniature golf land, and almost every mom and pop restaurant. Today, you may still see the odd “arcade” game at one of these places but your experience will not be the same. Most likely you aren’t going there to play Street Fighter with your friends or trying to earn the high score on the newest Shmup. You are there because you are trying to have dinner, there is a 1+ hour wait to be seated, and they happen to have an arcade machine to help you kill the time.

One of the biggest differences is that during this era, you had to make an effort to visit these places if you wanted to play the newest, raddest games, because your home console or PC just wasn’t powerful enough to offer the same experience (more on this later). An arcade game or even just the PCB (printed circuit board) without the cabinet could cost an arcade operator thousands of dollars. This cost would be made up over the course of a few months up to a few years of kids, like me, feeding our precious lunch money, converted to quarters, for a few minutes of beautiful, bitful, bliss.

It wasn’t until the release of the Neo Geo AES (Advanced Entertainment System) that the USA finally got real arcade quality games at home since, unlike Japan, the USA never got the Sharp x68000. While the above statement is true, the reality is I knew only one person, a kid from school, to ever own a Neo Geo AES while it was new. With a price tag of $650, it included two arcade sticks and two games, Magician Lord and Fatal Fury, and it was completely out of my league. My local video store had one that could be rented by the hour, which my brother and I tried a few times (not a bad way for my parents to get some alone time…). It was amazing to behold, something I’ve always wanted, and something I was sure I’d never have. The graphics were awe inspiring with tons of huge sprites, impressive scaling, and great sound all leading to an uncompromising arcade experience. The Neo Geo AES came out in 1991, the same year as the Super Nintendo. I did get a Super Nintendo for $199 and I loved it, but never I forgot about the Neo Geo.

One of the largest defining factors of arcade games is the actual game content, the design of the levels, the scoring mechanics, and the rewards. The best arcade games have a perfect difficulty to reward ratio. That is, they aren’t too easy that you can beat them easily, but they aren’t so hard that you only get to play for 5 seconds before having to feed more quarters. These ideas are very different than those that may make a good home console game since these games are bought once for a large sum and “should” offer many hours of enjoyment over their lifetime. I believe that arcade games can be sorted into at least one of the three following buckets.

The quarter feeder is the kind of game that likely includes sections of fun skill based content with occasional areas of cheap difficulty spikes to ensure the money keeps flowing. Genres that fall into this category are beat-em-ups, run-n-guns, and, to some degree, Shmups. As a child, I loved these games. I can’t tell you how much cash I’ve burned over the years on Final Fight, Teenage Mutant Ninja Turtles, and the Simpsons. I still love these games and find myself playing them when I can find them. These are probably some of the most profitable of the bunch as well.

When I was growing up, I wouldn’t have made a distinction between score based and quarter feeders. In a way, every score based game is also a quarter feeder since you can just keep feeding quarters and continuing until you beat them. The branch occurs when you start paying attention to score. In score based games, continuing resets your score. So, if you are playing for a high score, you will never “Continue” and always wait for the time to run out to enter your high score and/or start a new game. The genres I would group with this category are Shmups and, to a lesser extent, puzzle games. Some of my favorites Shmups are Blazing Star, ESP Ra.De., and Raiden Fighters Jet, and puzzle games are Magical Drop 3 and Puzzle Bobble.

Fighting games, sports games, pong, puzzle games, any game that allows you to play against another human opponent. These games always end with one winner and one loser (sometimes both can lose when the outcome is a tie). These games affect people very differently than the others, it’s just you and your opponent and no one to blame your actions on but yourself. Many times, when you win these games, you get to keep playing until someone deposes you. This can be a real rush and trigger primal pleasure centers in the brain. Some of my favorite head to head games are Street Fighter 2, Samurai Shodown, and Magical Drop 3.

Internet gaming in the 90s was different. Early 90s saw the proliferation of 28.8kbps modems (note that’s kilobits per second). Amusingly, while researching these speeds people often used the metric of how long it would take to download a single pornographic image. Here’s some <math> comparing early 90s dial up to affordable cable internet available in my area today.

Multiply this by 10 to get gigabit fiber available in some areas yields 34,722 times faster than 28.8kbps dial up. This tells me I need more fiber in my diet.

Don’t run away, that’s the end of the </math> in this post. As you can tell, speeds were woefully slow which meant internet gaming and instant gratification didn’t belong in the same sentence. That doesn’t mean internet gaming didn’t exist; there were MUDs and you could still play a game of chess over email. It means the arcade experience simply could not be recreated over the internet at the time. You had to leave the house. You had to get to know the community, its corresponding meta (the term hadn’t been coined yet but it definitely affected the community), and, at least in my area, if you were lactose intolerant, you would need to bring a lunch.

For whatever reason, it was pretty rare to come across an arcade that didn’t also sell pizza or a pizza place that didn’t have an arcade. The community that spontaneously combusted into life knew no age limits and no class distinctions. I don’t recall many girls playing games in the arcades at the time but I don’t think sex would have mattered either. I have a fond/sad memory playing in a Street Fighter 2 tournament at my local pizza place making it to the finals only to be taken out when my opponent was also playing Guile and the game didn’t allow mirror matches. I had to go with my second tier Ryu and ended up losing as a result. We were about 10 years apart but it didn’t matter and was an awesome experience.

Arcades made me into who I am today. They gave me a safe, inexpensive hobby. They gave me the skills and confidence to stand up to my seniors. They gave me an appreciation for technology and wisdom about how resources (and lack thereof) shaped gaming while also informing me about what I like in my games. I feel there are similarities in the online vs face to face competition and wars in the 20th century vs 21st century. You learn a lot about yourself by learning about your opponents.

Check out part 2 for some interesting new/old hardware for playing Neo Geo arcade cartridges as well as JAMMA PCBs at home.

1 thought on “Ode to Arcades 1: What Made Arcades Special?”